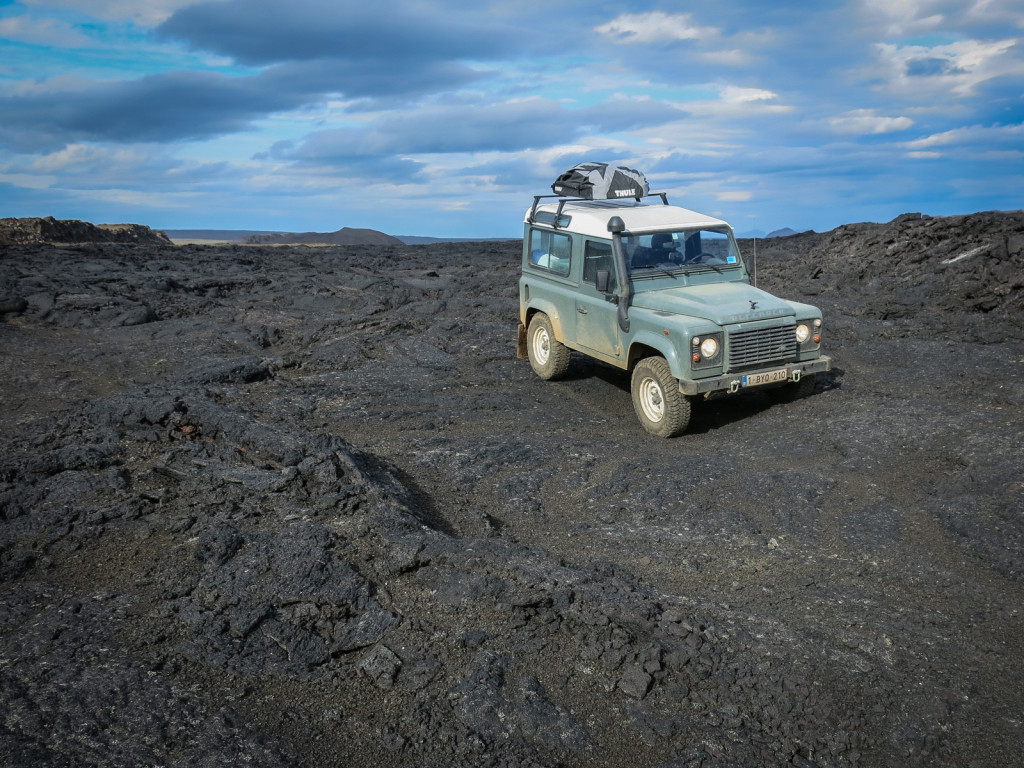 I know this is not the first time I write about Iceland. But I can’t help it, this land has a magnetic effect on me. I have spent 3 complete months in it’s amazing highlands in the last 5 years. But last summer, the summer of 2014 was something special. Over the years I have met many people, some of them are good memories and some became good friends. In 2013 I experienced one of the most out of this earth dives to date. The Silfra crack in Thingvellir national park. That day was made possible by the nice people of Scuba Iceland. We kept in touch, and last summer I had the opportunity to work with them as a dive guide. YES, I answered loud and clear! And the planning started. It was going to be a three and a half month trip. I was goning to take my brand new Land Rover Defender on her maiden voyage. So I planned three weeks in Iceland to cross the highlands from east to west, live and work in Reykjavik for two months and finish with a west to east crossing back to the ferry to mainland Europe. I decided to leave the Land Rover bone stock apart from a snorkel to cross the many rivers formed by the melting glaciers in summer. Most of my budget was needed for cold proof diving gear anyway.

So early june I loaded up the truck with camping – and photo gear and headed to the north of Denmark to embark on the ferry for another Icelandic adventure. It turned out to be a truely beautiful experience. A combination of my biggest passions, nature, diving, overlanding and photography. It doesn’t get much better than this! I hope you enjoy some pictures! 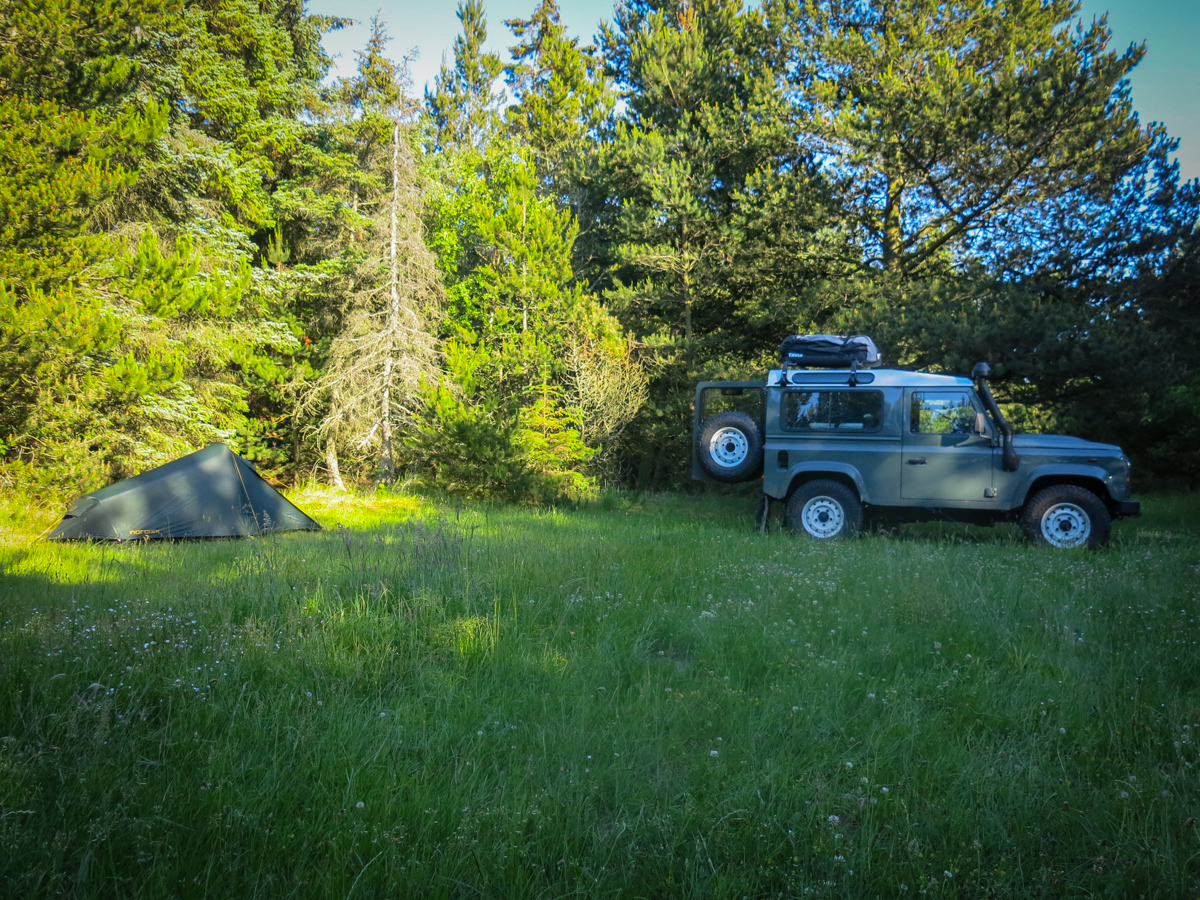 We found this beautiful camping spot in Hirsthals, Denmark. Perfect, just a 15 minute beach drive away from the ferry. 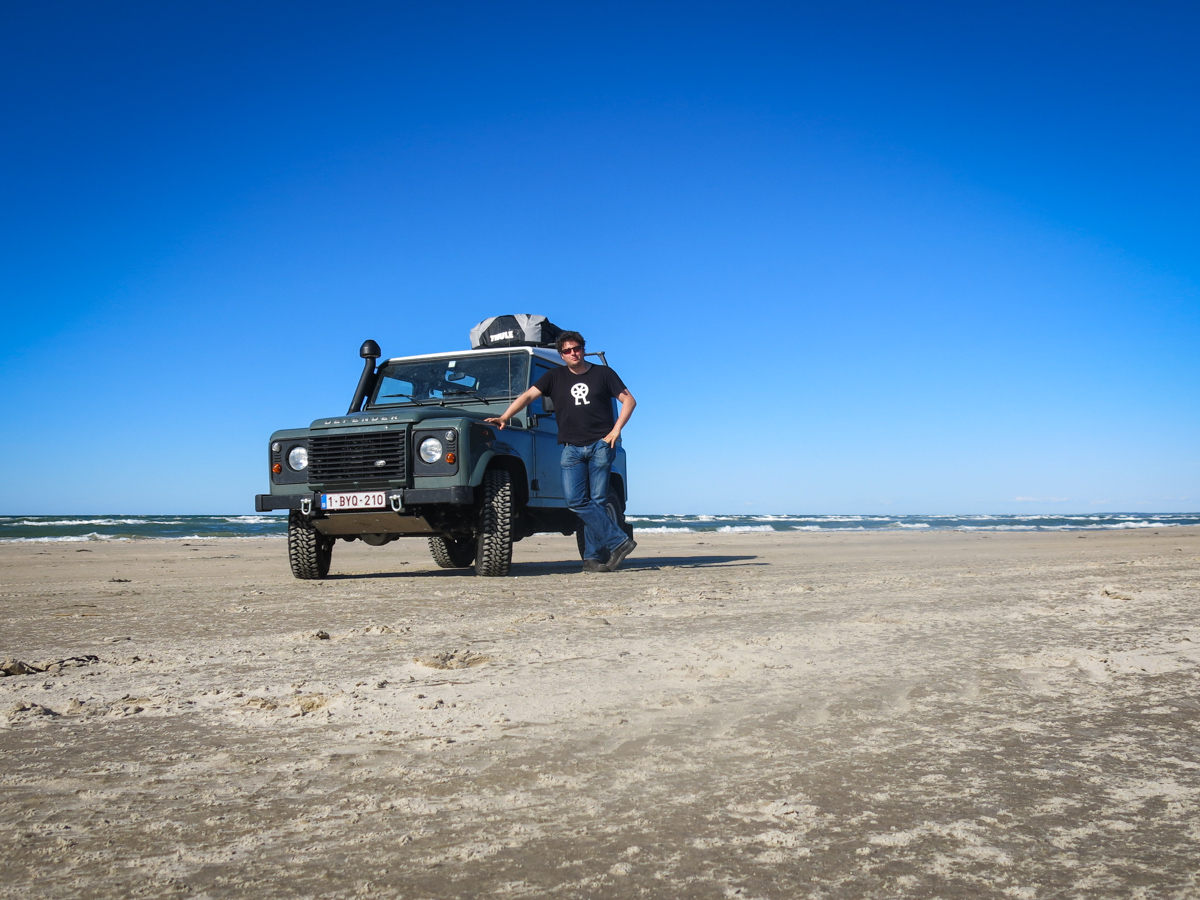 It is possible, even in Europe…this beach is a public road…and it took us right to the boat. 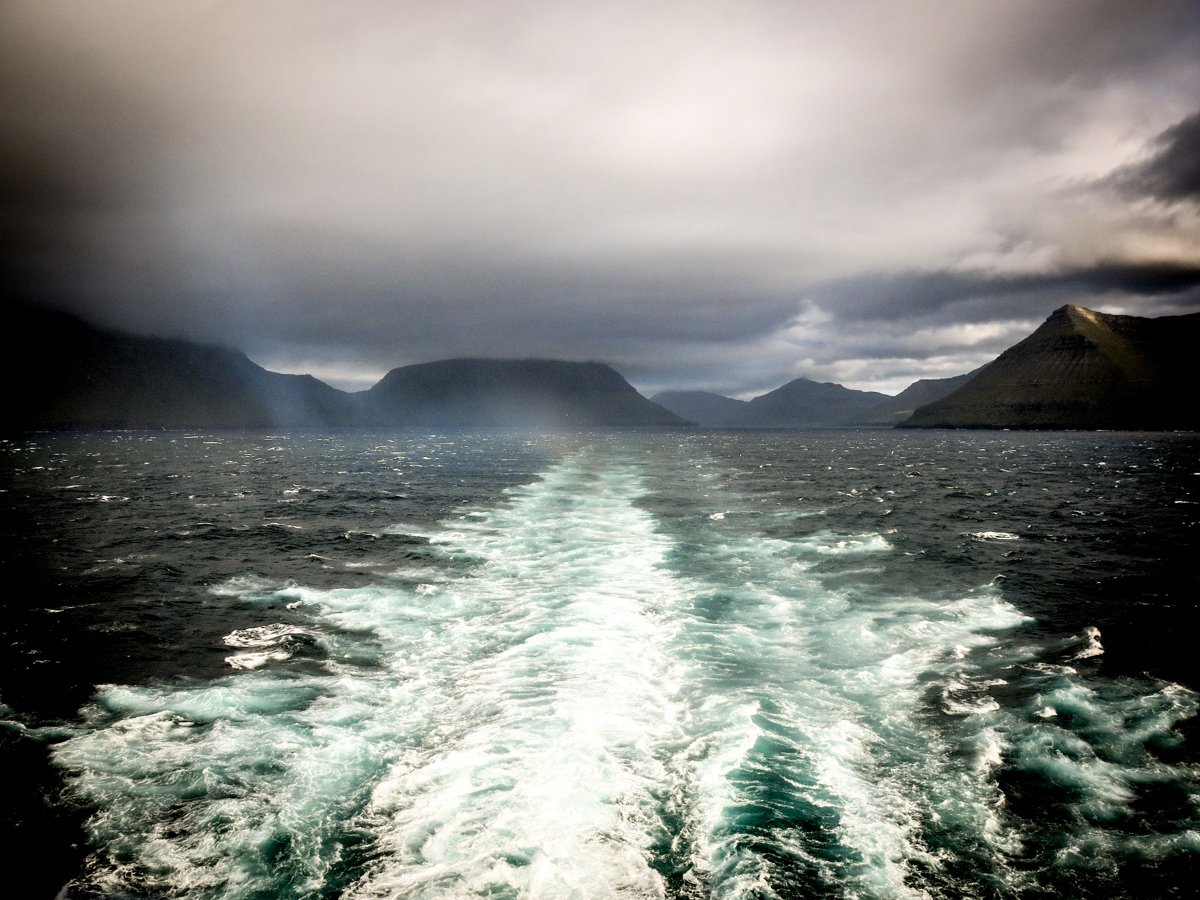 The ferry to Iceland passes the impressive Faroe Islands. 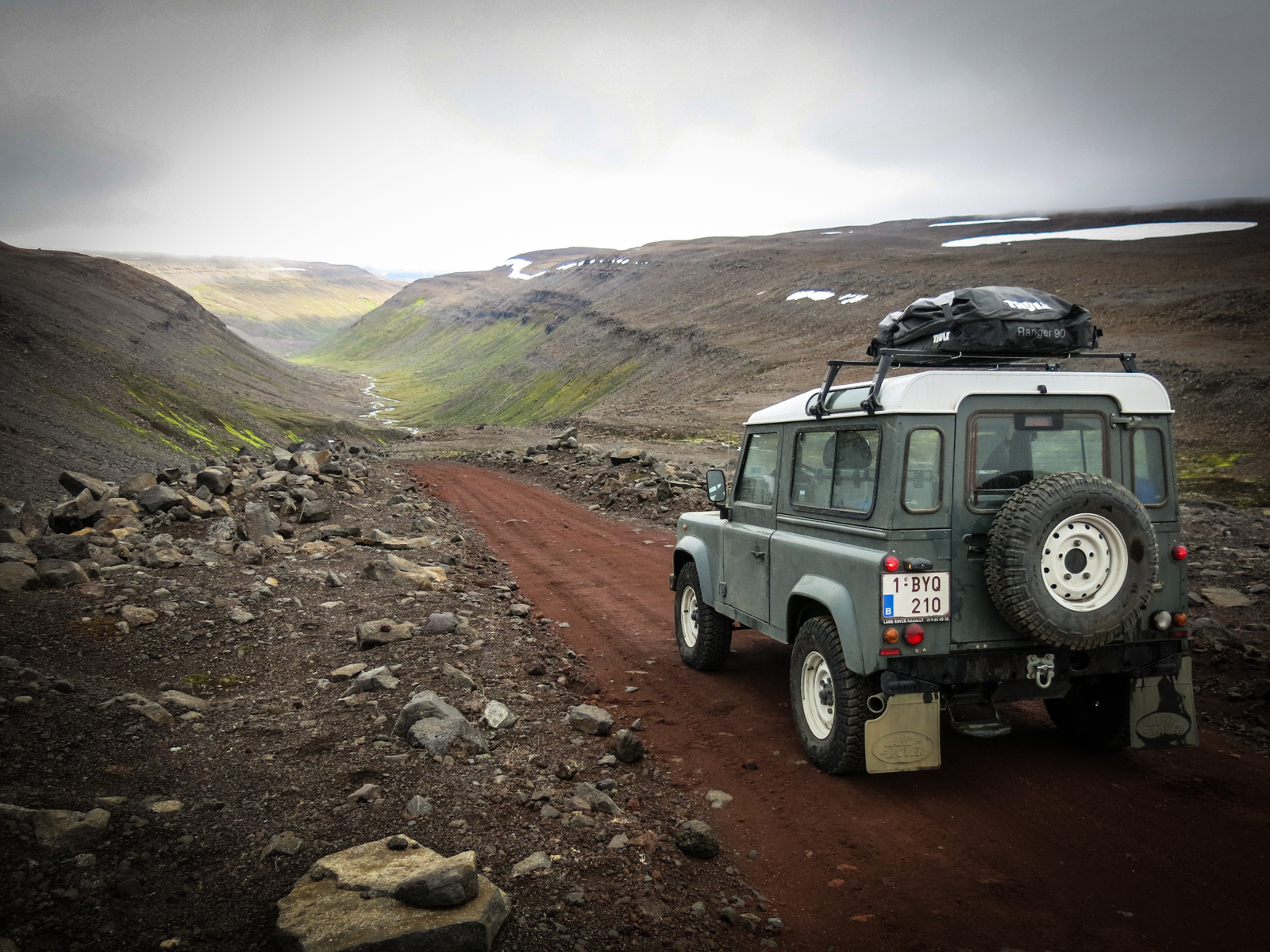 In the highlands you cross the most beautiful valleys, like the Eyjafjardardalur, south of Akureyri. 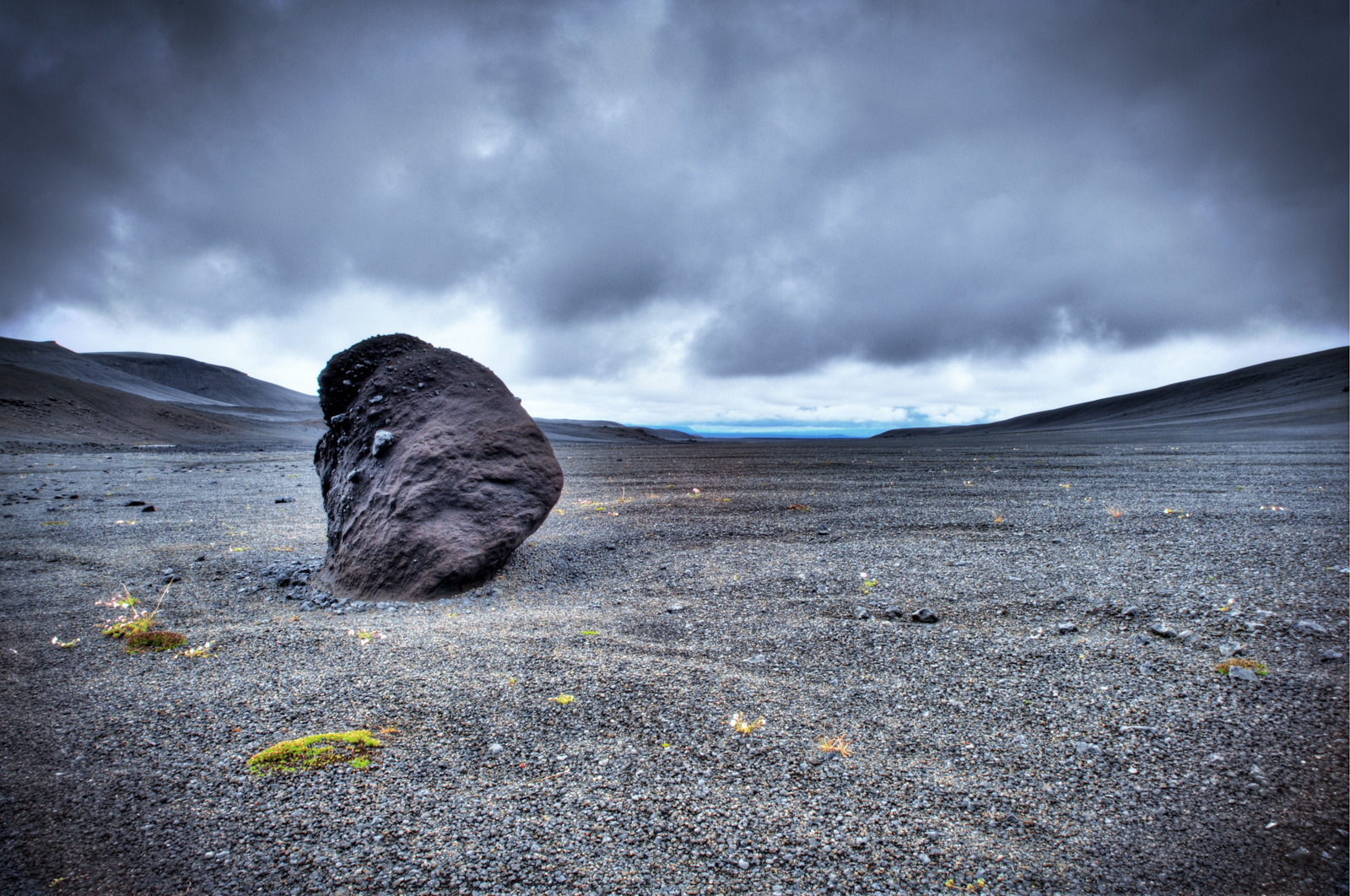 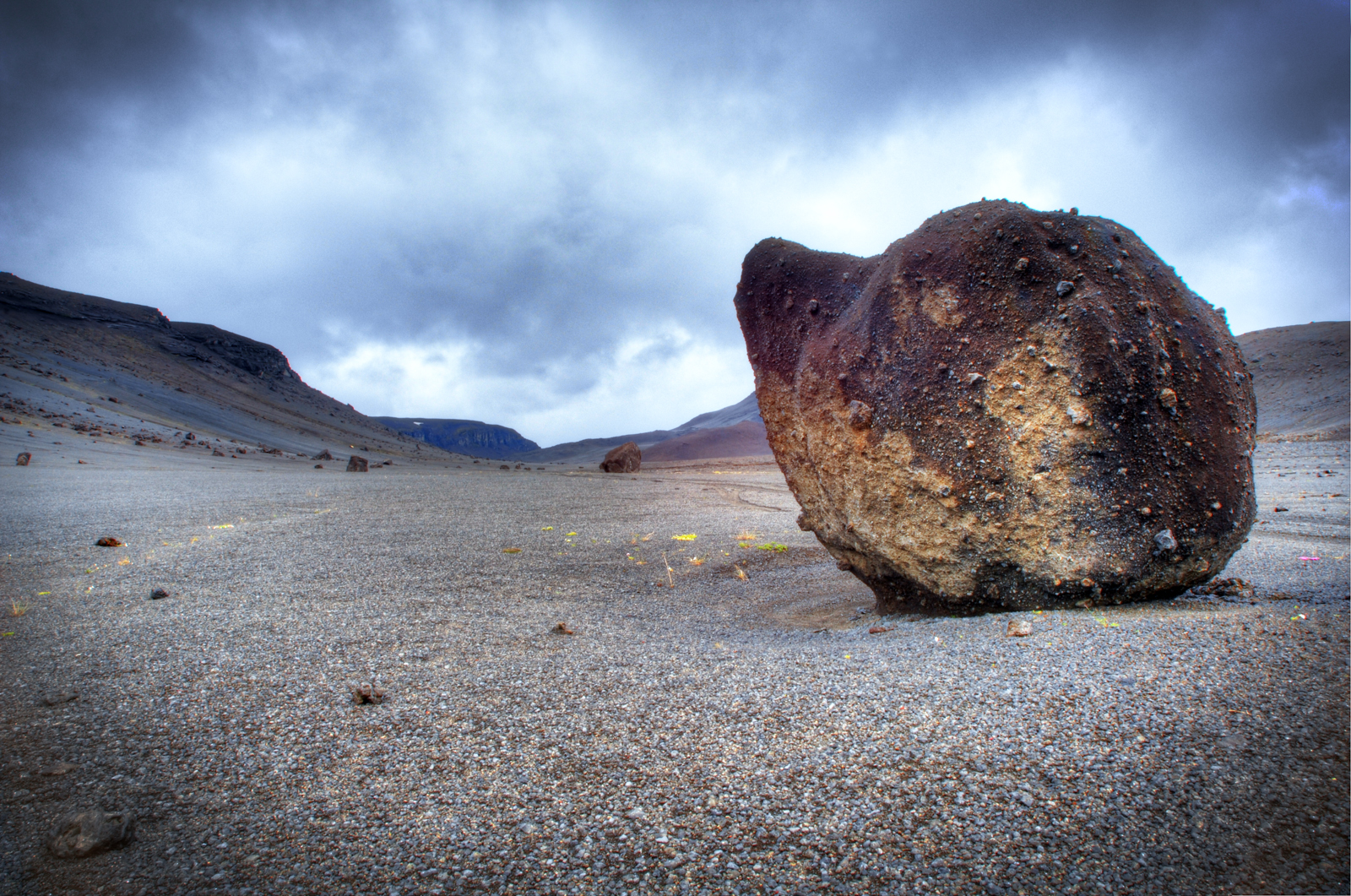 South of Myvatn starts my absolute favorite track. It has no number and it is a very difficult track trough rough lava fields. It takes you south to the superb Dyngjufjoll valley where the track zig zagges trough these amazing boulders. There is a basic emergency hut in Dyngjufjallagardur. From here you can go further south to the F910 that takes you to the Askja volcano. 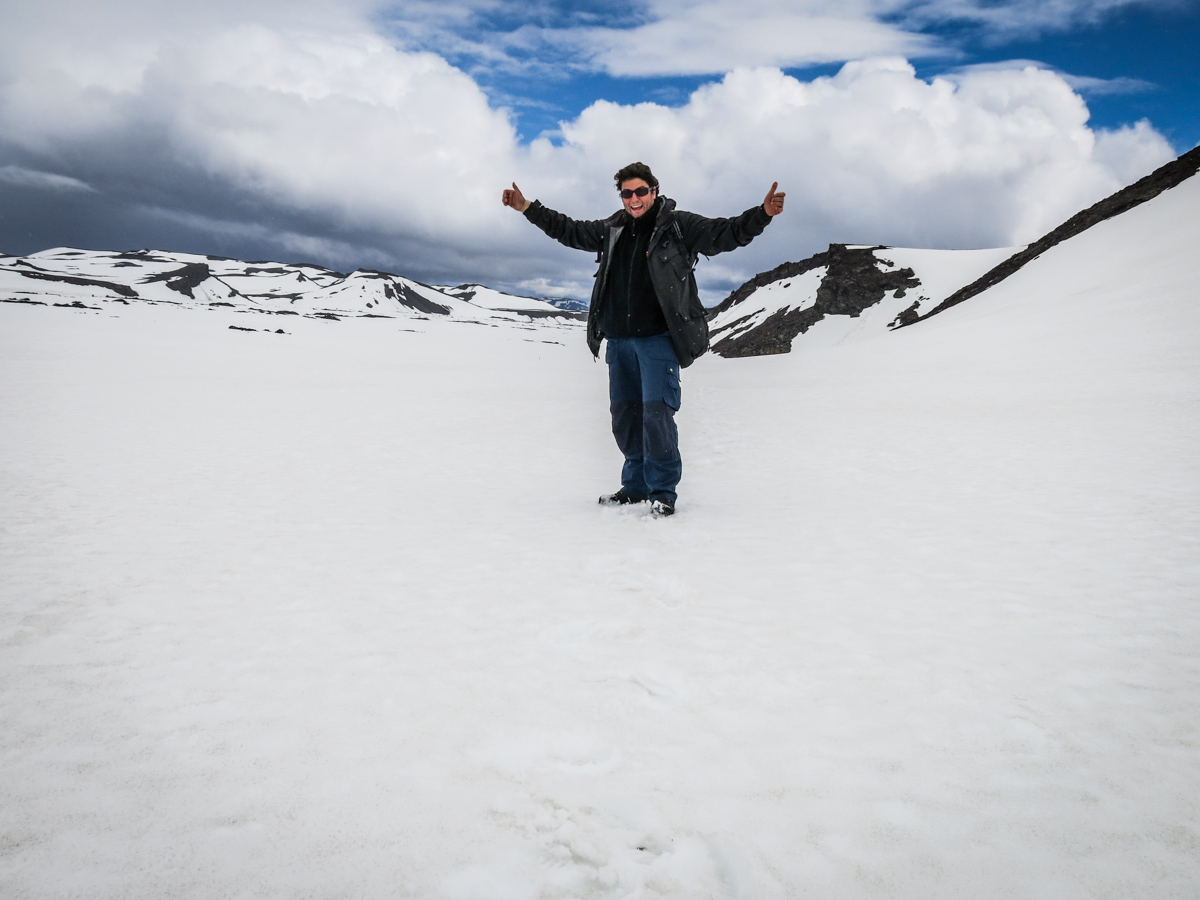 We were the very first people to go up to the top of Askja volcano in 2014. Because it was so early in the season it was a 23 km hike in deep snow. We underestimated this difficult hike, but the beautiful hike trough virgin snow made it worth the effort. Don’t do something like this without proper equipment and make sure to inform the Rangers. 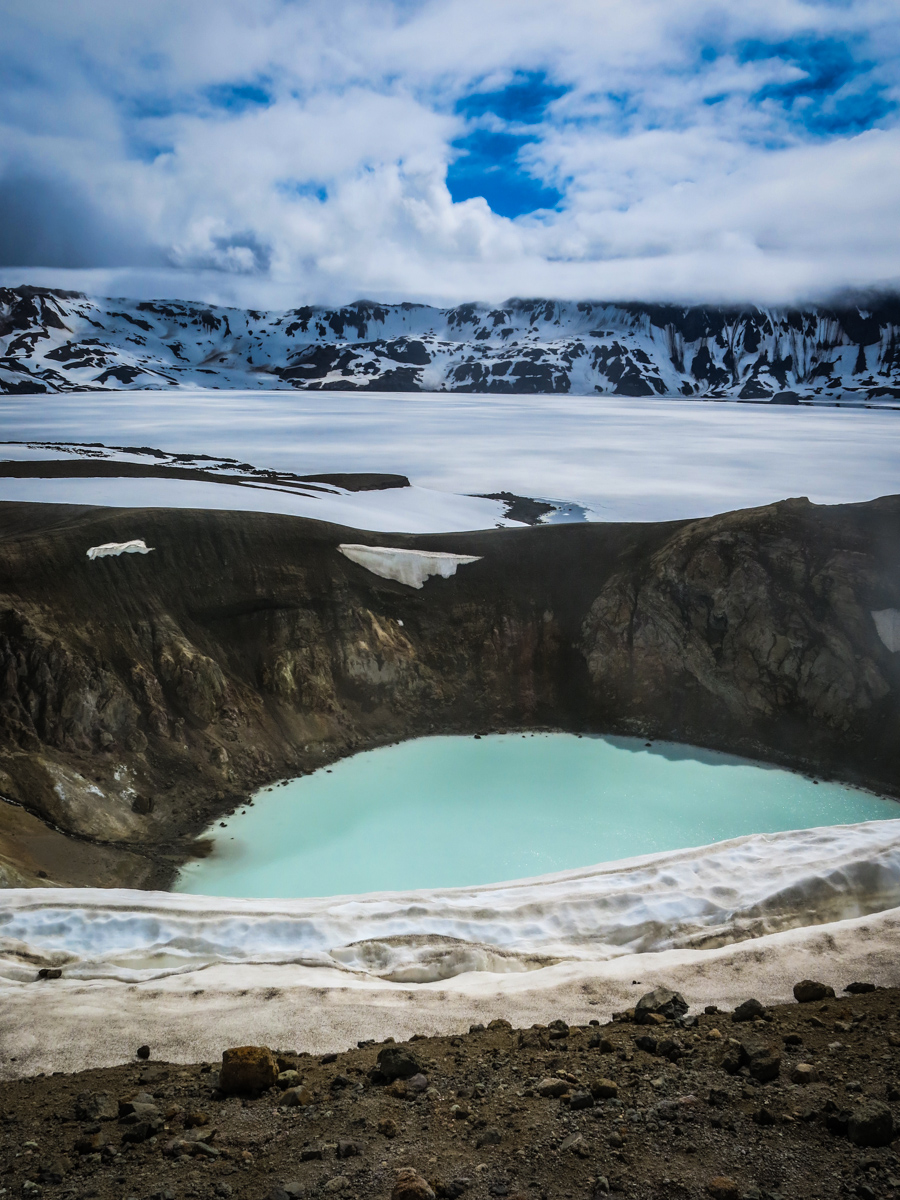 When you make it to the top you are treated to this amazing view. The crater in the fore ground is called Viti. The people of Iceland used to believe it was the entrance to hell. If you can make it down it’s a good swim. The water in Viti is about 40°C all year round. The big crater in the background is filled with water and became a lake at 1053m altitude. It’s called öskjuvatn and it is an amazing dive spot that only a handful of people ever dove! Something for my bucket list then! 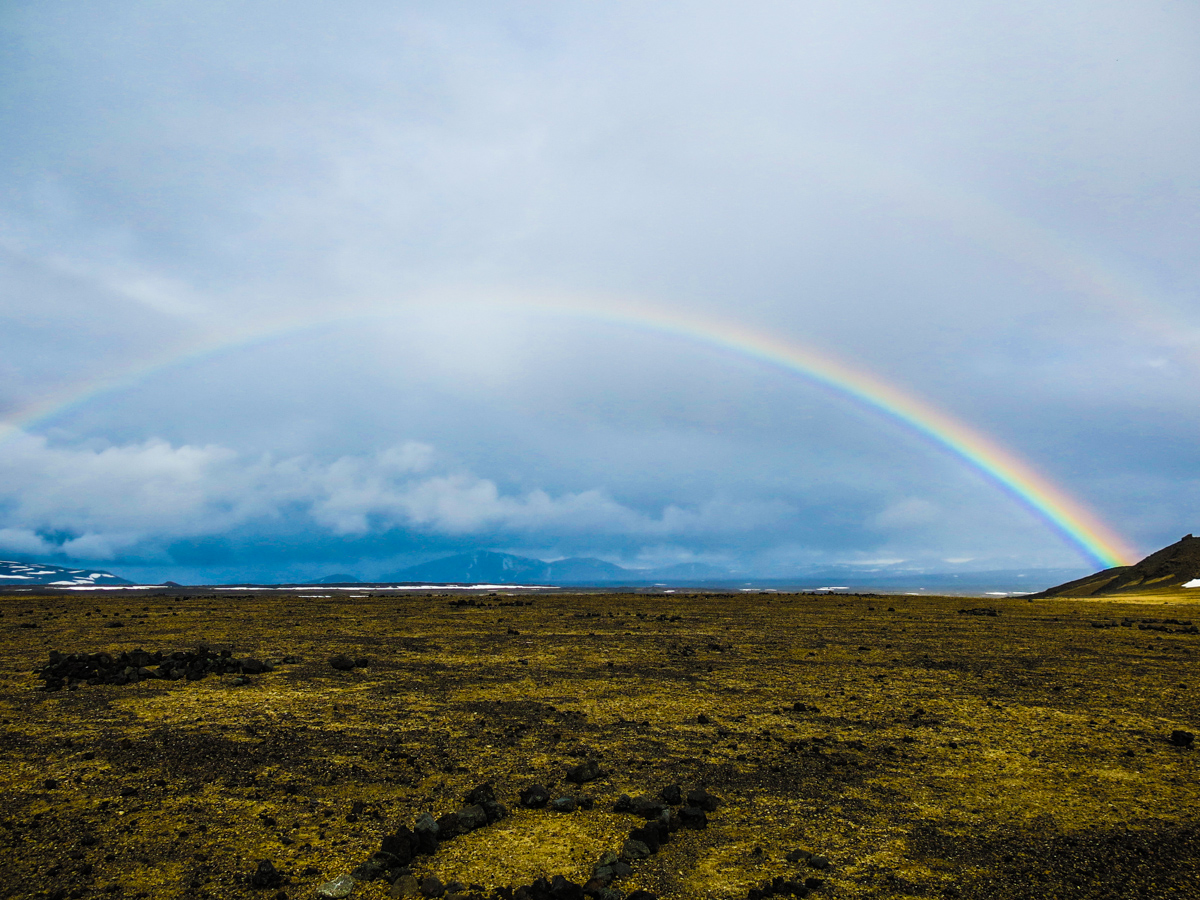 Askja is a popular spot in the highlands and there are a few huts, a camping site and a ranger post. With a decent 4×4 it can be reached fairly easily from the north via F88 to F910 to F894. This was the view from my tent…5 stars if you ask me! 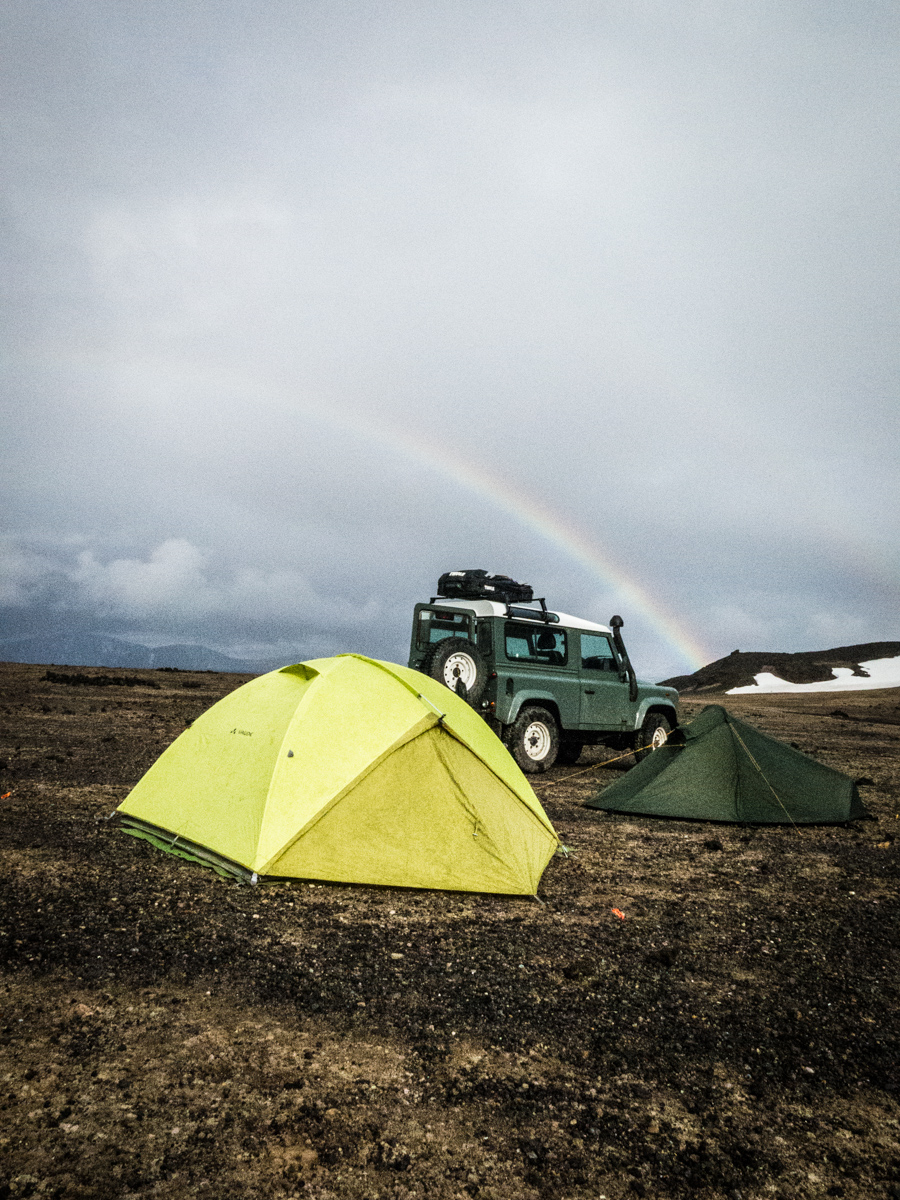 If you plan to camp in tents in Iceland, make sure to bring sturdy pegs, a wind resistant tent, a decent footprint and a warm sleeping bag. 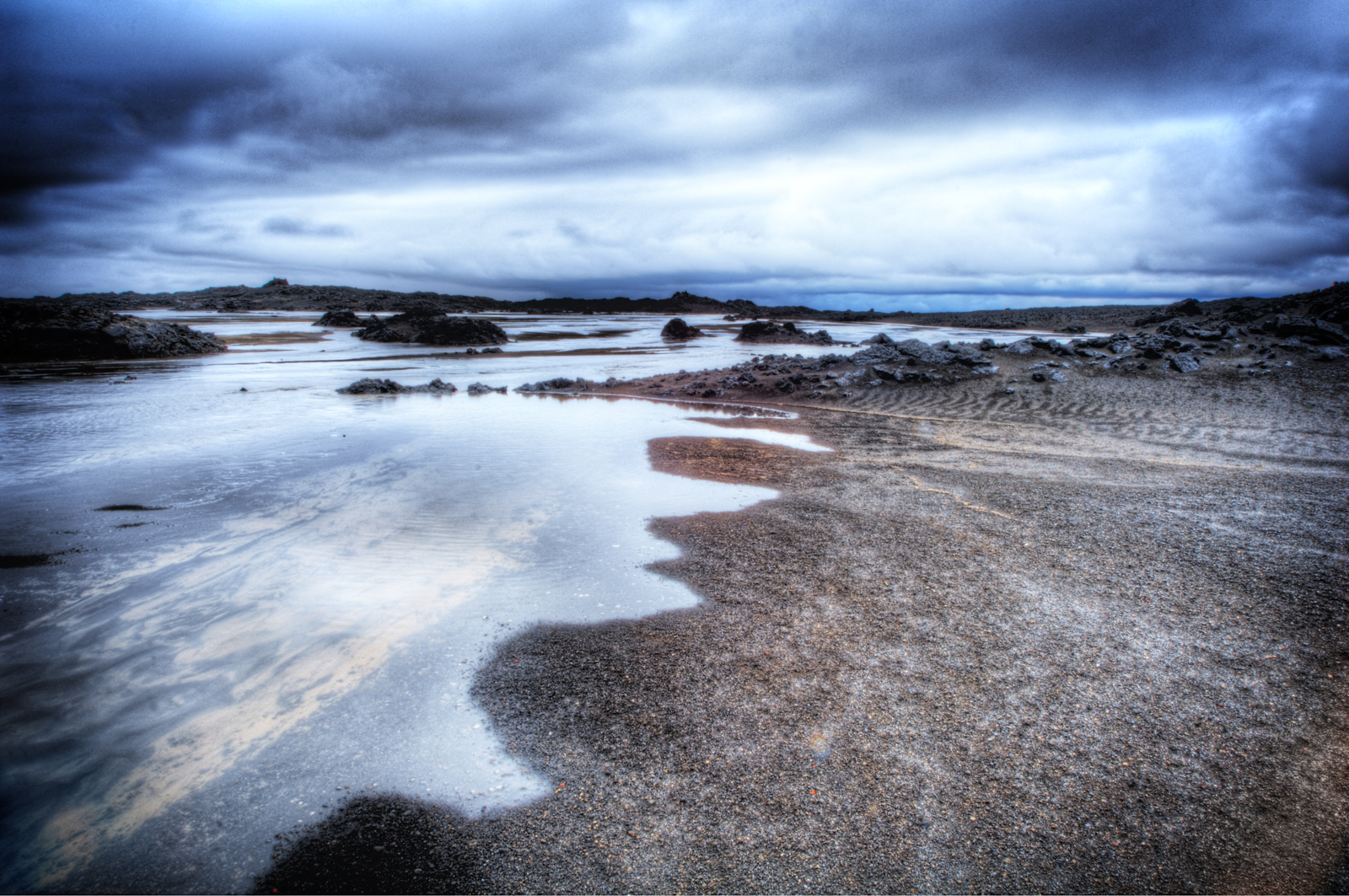 South of Asja there is another track with no number (south of the F910) that follows the north edge of the mighty Vatnajolull glacier. It is a flooded area with literally hundreds of water crossings. We did one crossing that was several km’s wide. It is only passable at certain times of the year and only early in the morning when the melting water of the glacier is at it’s minimum. The views are worth it! 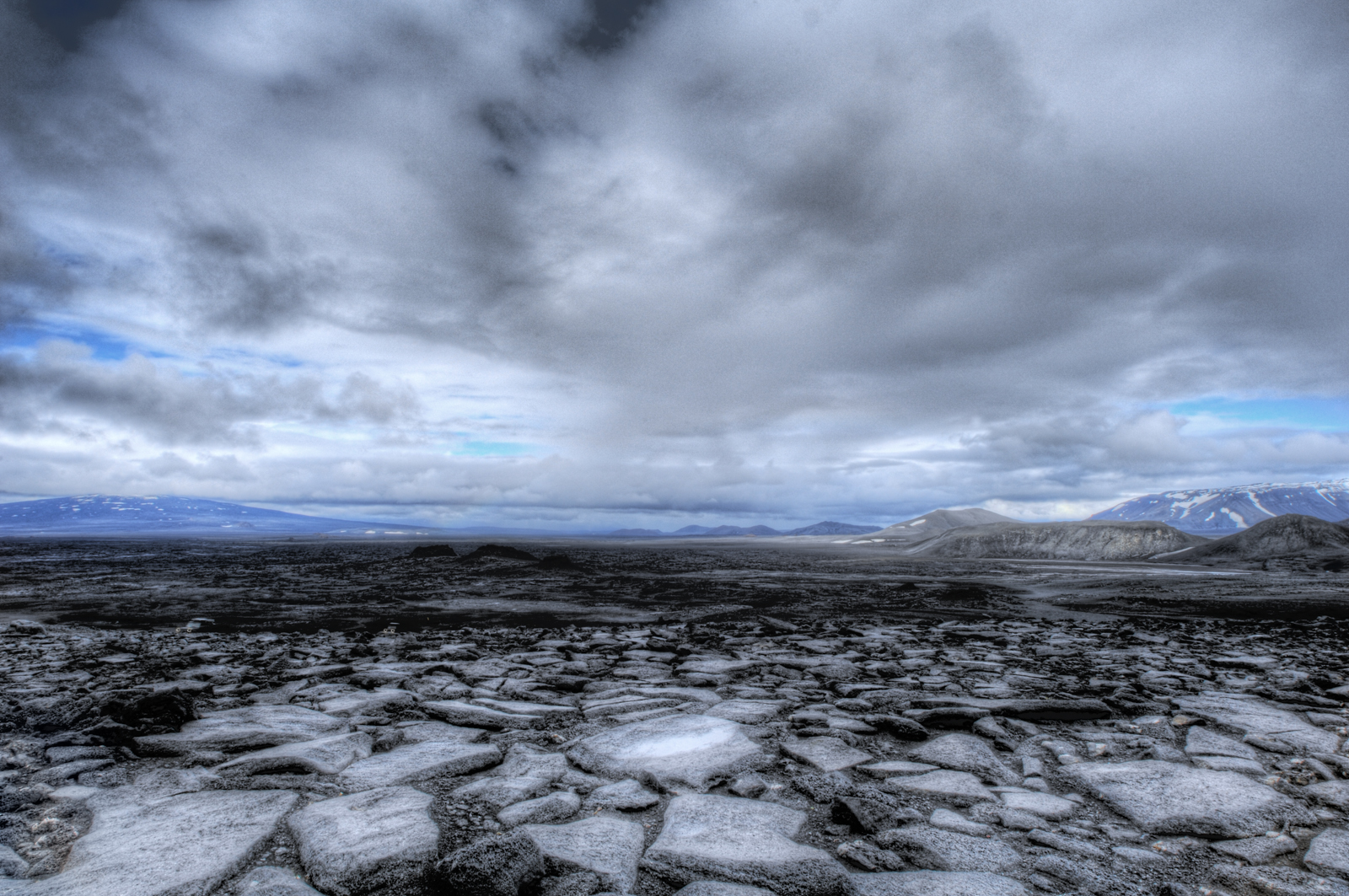 Another part of this track with no name between Holuhraun and Kistufell. Vatnajokull is in the background. 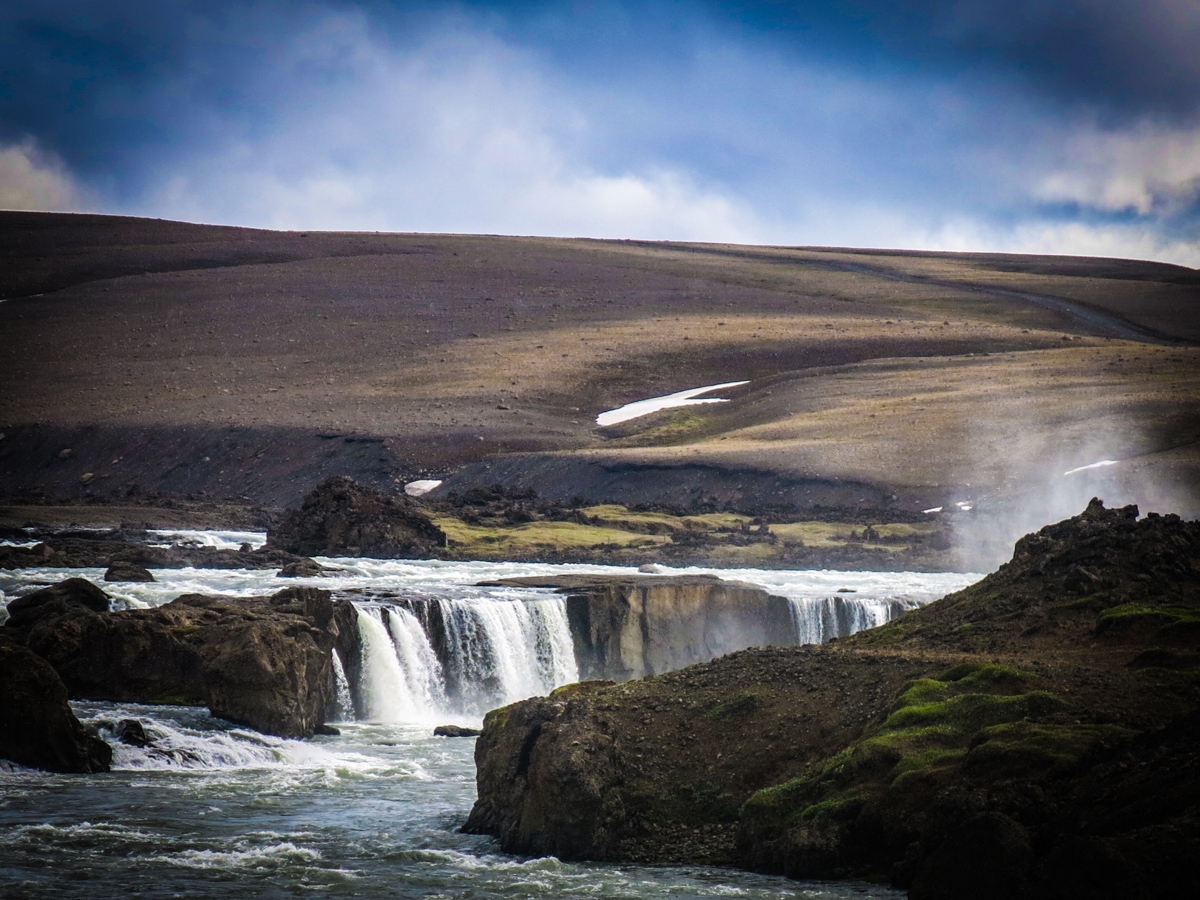 Dettifoss is a must see when you are in the area of Myvatn, just take the 864 (gravel) north from the ringroad. 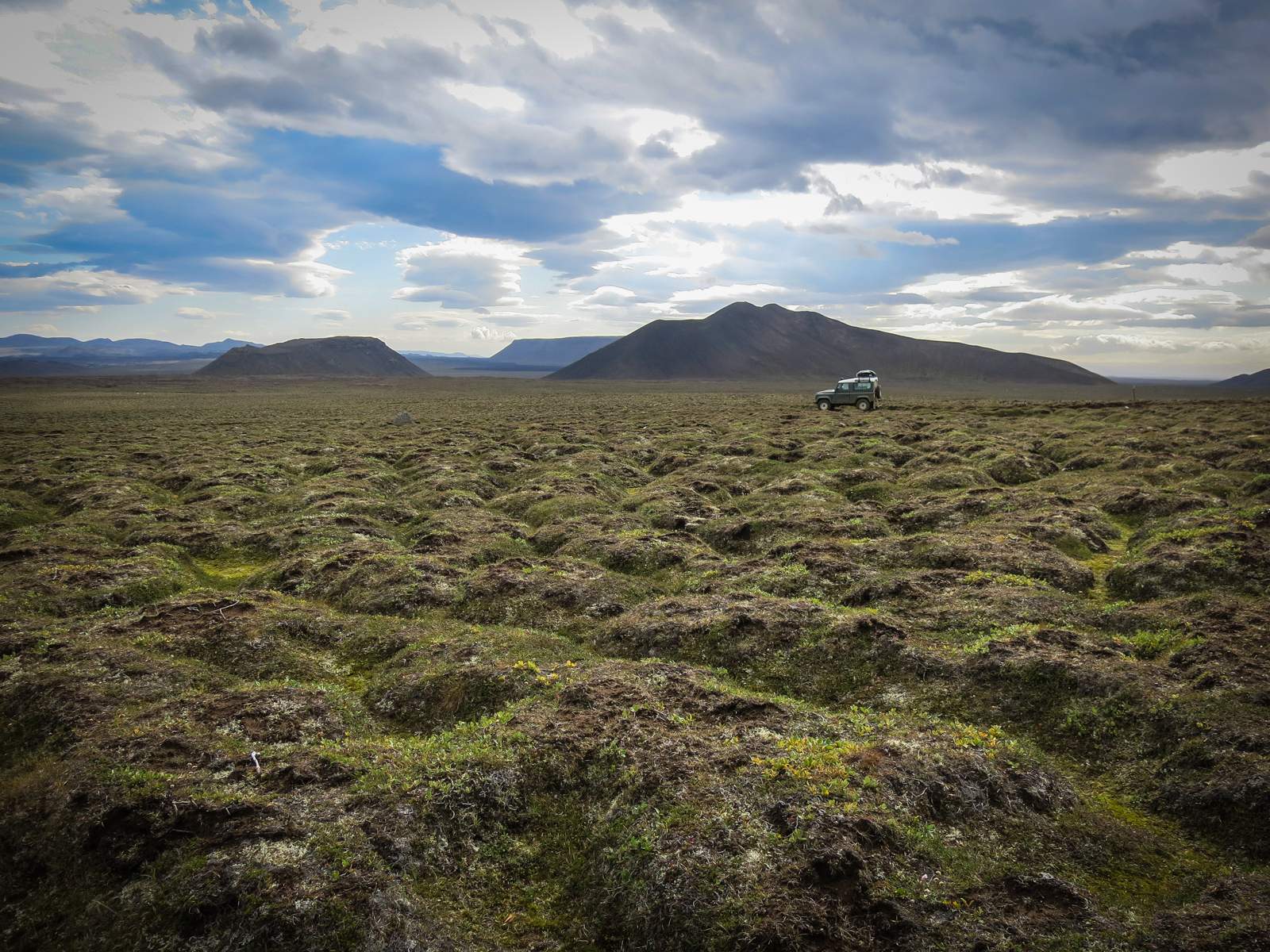 North of the ring road, east of Husavik there are a lot of tracks that are really seldom explored. They are worthwhile but can be very difficult because there is no passage and some tracks are in very bad shape. If you want to feel like you are the only person on the planet you have to try this area! Very beautiful lava fields all over this part of Iceland. 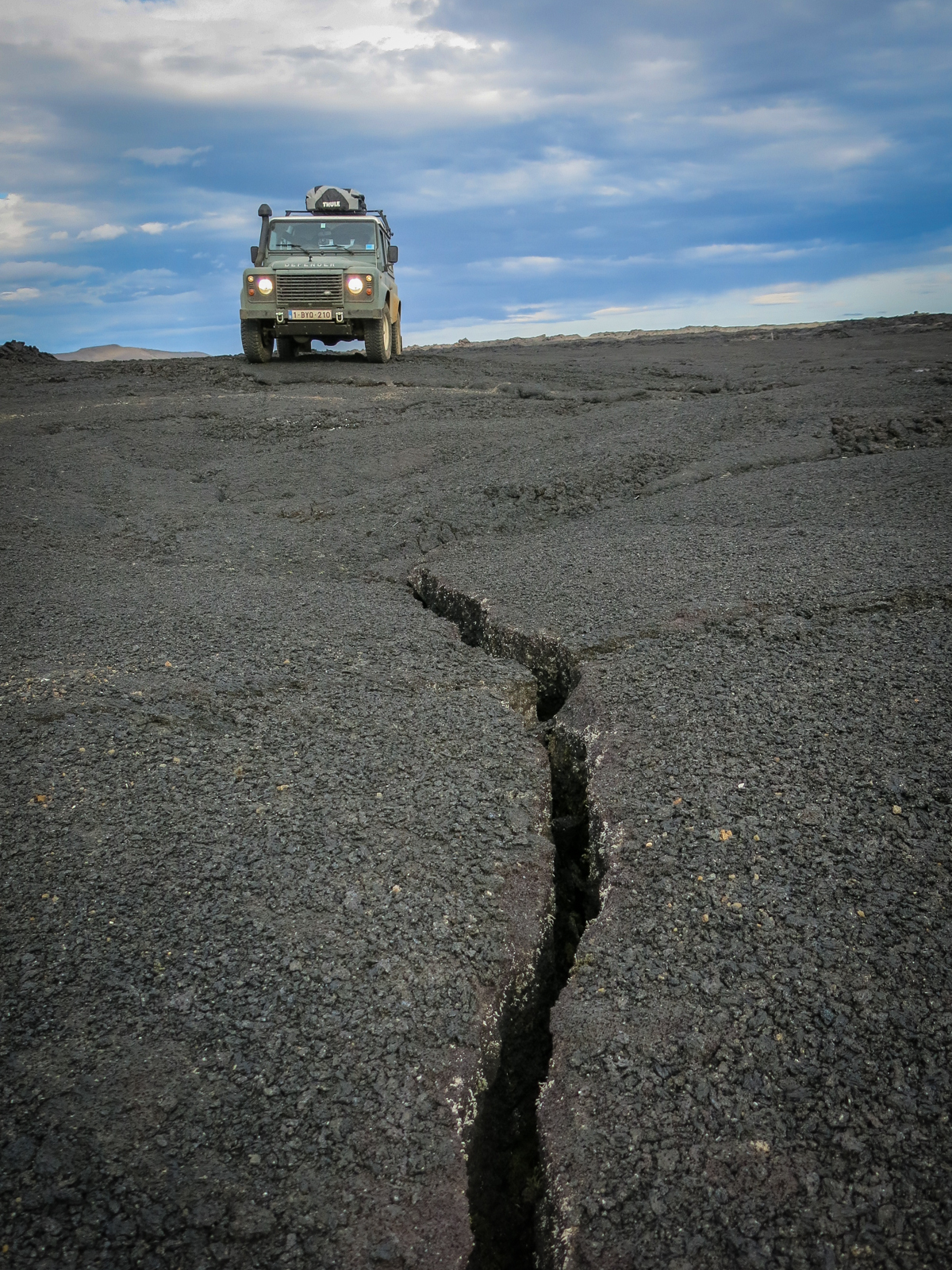 In the south af this rarely visited area the track disappears and becomes very young lava field from the 1984 eruption. This is just east of Gaesafjöll. 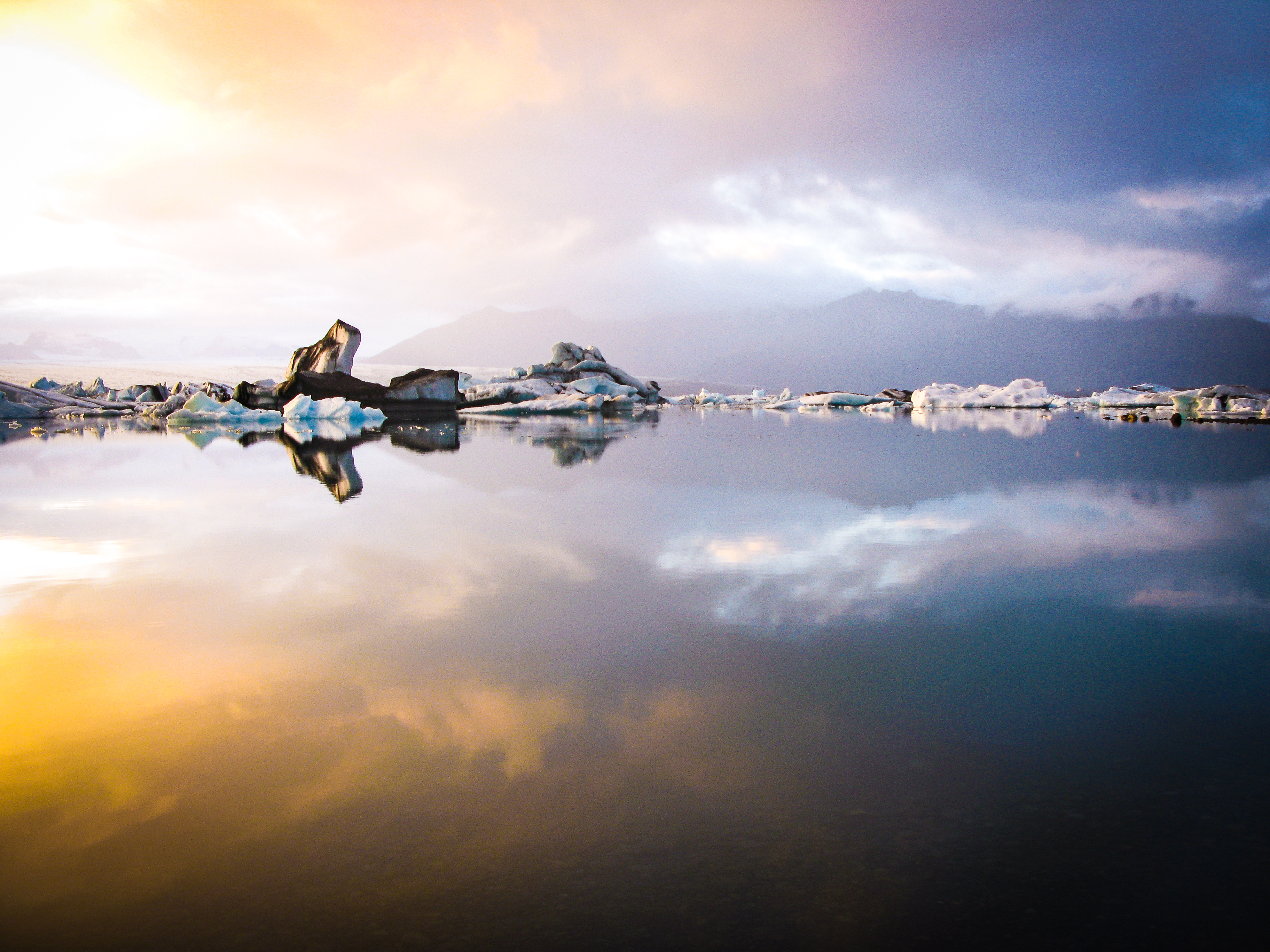 South of the Vatnajokull glacier you have the world famous glacier lagoon called Jokullsarlon. If you want to take pictures, go very early. The light will be better and it will be less crowded. 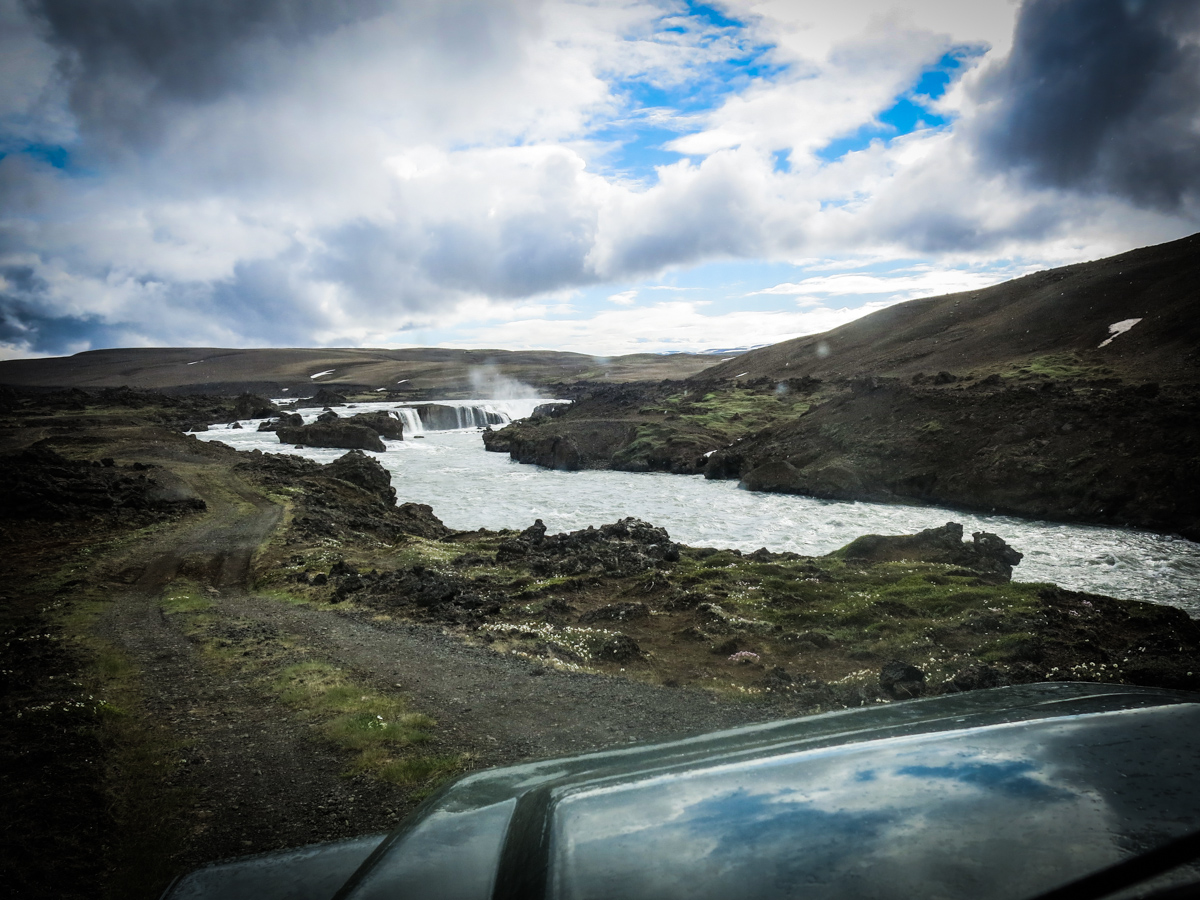 Between Laugar and Myvatn starts a track that follows the river south on the east side of the river skjalfandafljot. Again it has no number but it is a magnificent track that takes you back into the highlands an to one of icelands most beautiful huts, Rettartorfa. Along the way there are many waterfalls like this one, Aldeyjarfoss. 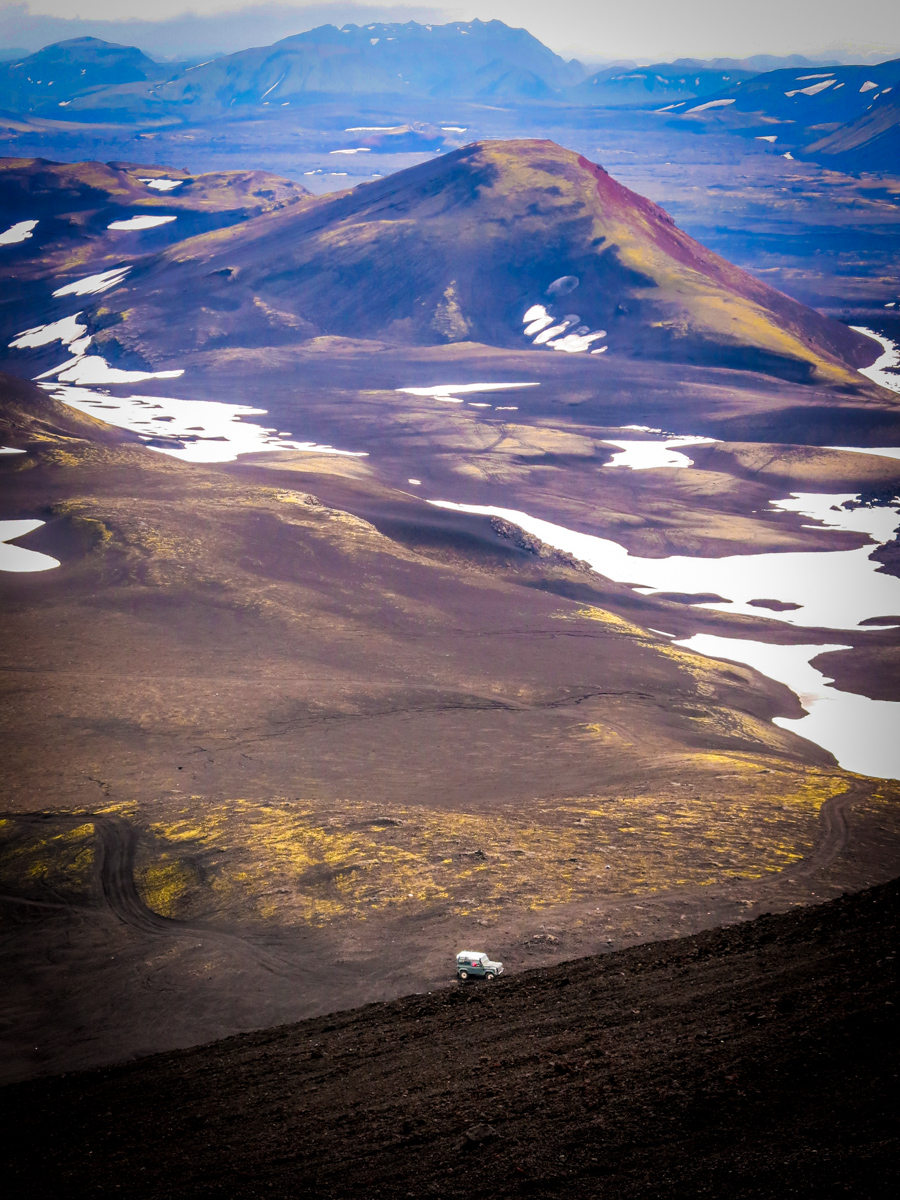 In the southwest lies the mighty Hekla volcano. It is an active volcano with a 1491 meter high summit. Icelandic super jeeps sometimes climb this volcano up to 1100 meters altitude to shorten the hike to the top. So there is a vague track. Our stock Land Rover managed the same climb with the some determination and aired down tires. The view here is fantastic! 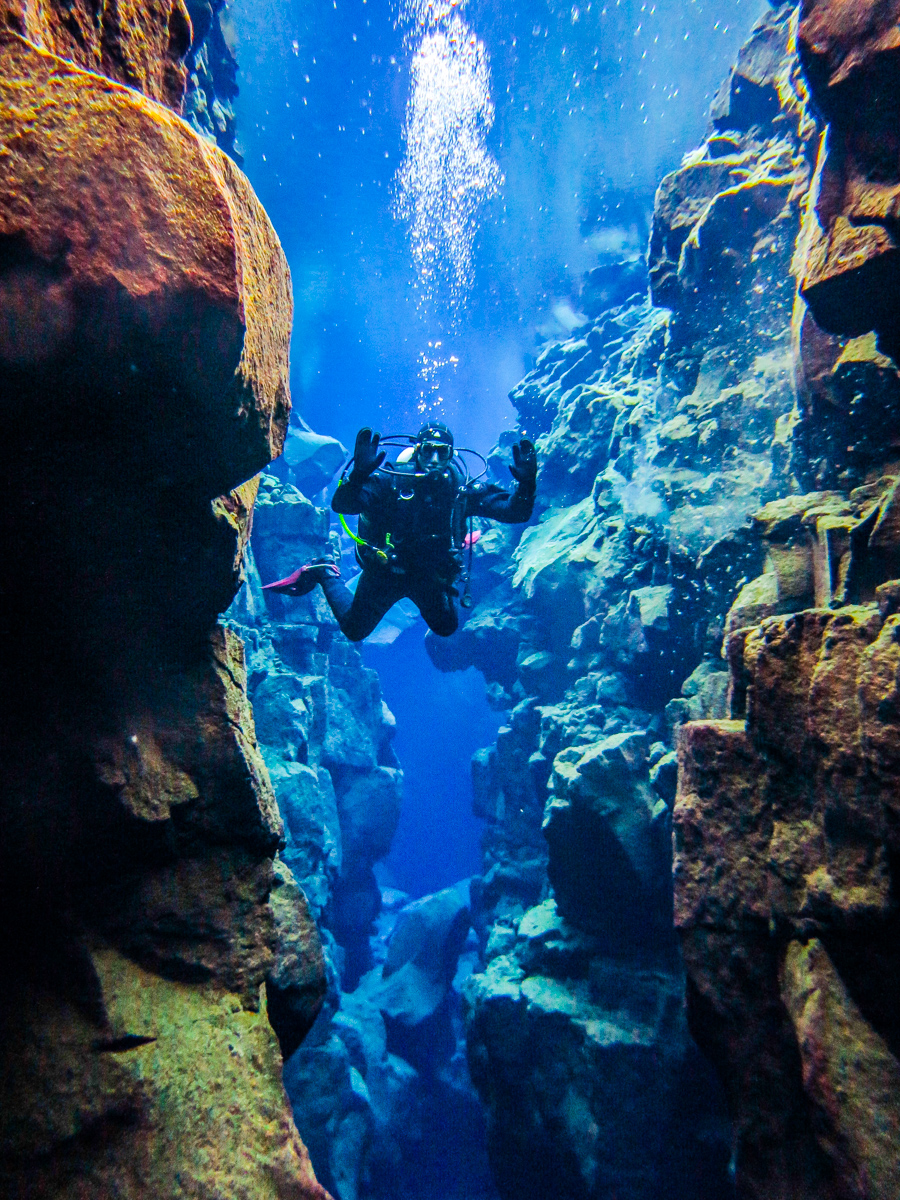 After I reached Reykjavik, play time was over and I had to go to work. Although I have to admit that the view from my office could have been worse! I feel blessed that I was able to work in one of the most beautiful dive spots in the world, the Silfra pass. This is a picture I took of my brother when he visited me. Read more about this amazing location here! 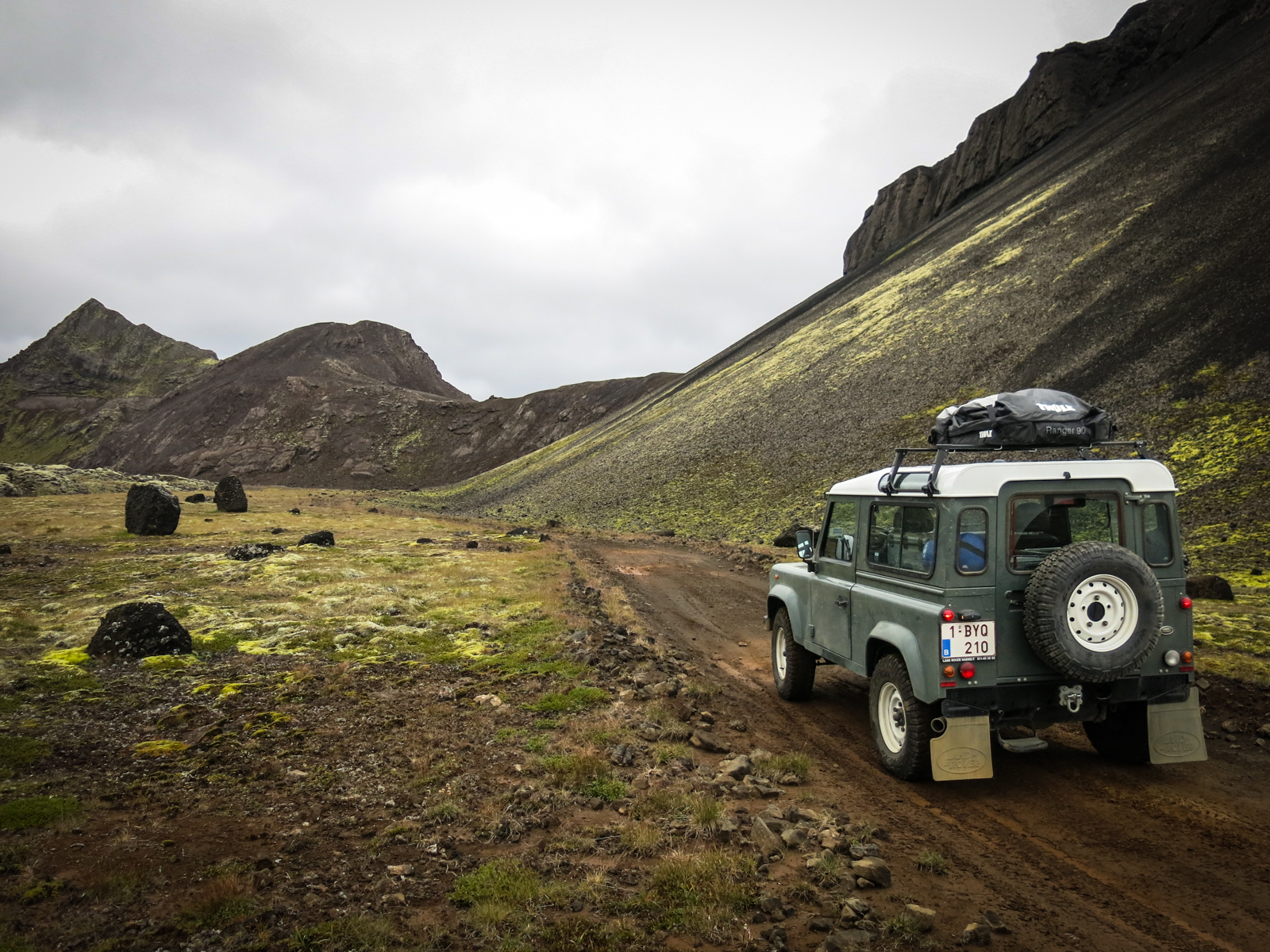 Just north of Thingvellir national park there are some beautiful unknown tracks to be discovered, this one goes from the paved 365 road north to Hlödufell, just south of the Langjökull glacier. A very rewarding trip! 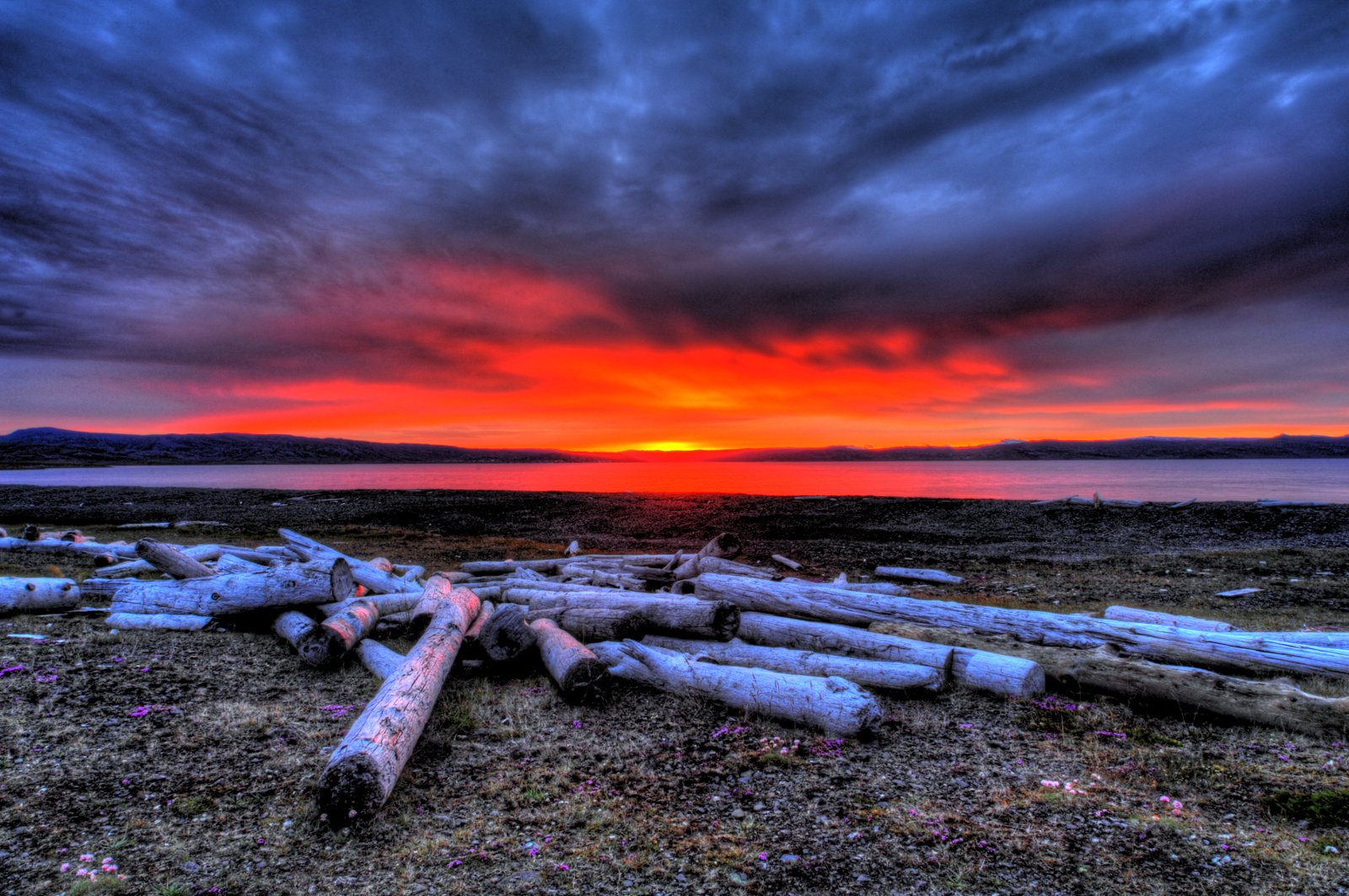 In the northwest of Iceland you find the Westfjords. Here you can travel well north of the Arctic circle and enjoy the typical sceneries with all the driftwood arriving in Iceland from Norway and even Siberia. 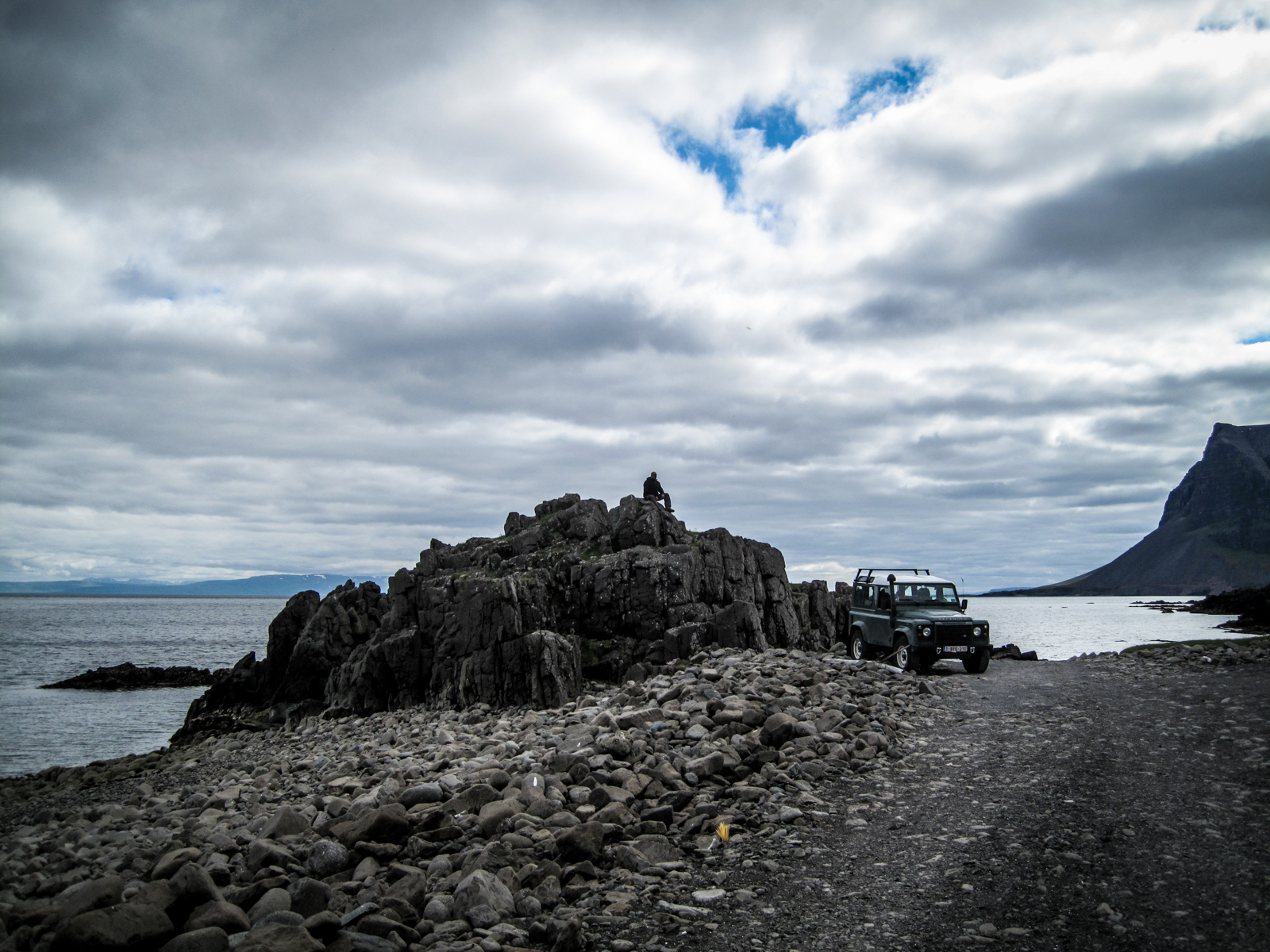 So far north and so harsh that this part of Iceland can only be reached by air most of the year. But in summer you can enjoy these amazing fjords by car. Time for a selphy then!

Iceland, I will be back!

Red dirt roads in The Land Of Never Never